What happened next: brain tumour

Paul Revington is a fit and active professional sports coach. When he began experiencing unexplained headaches, he chalked them up to work stress. He was wrong 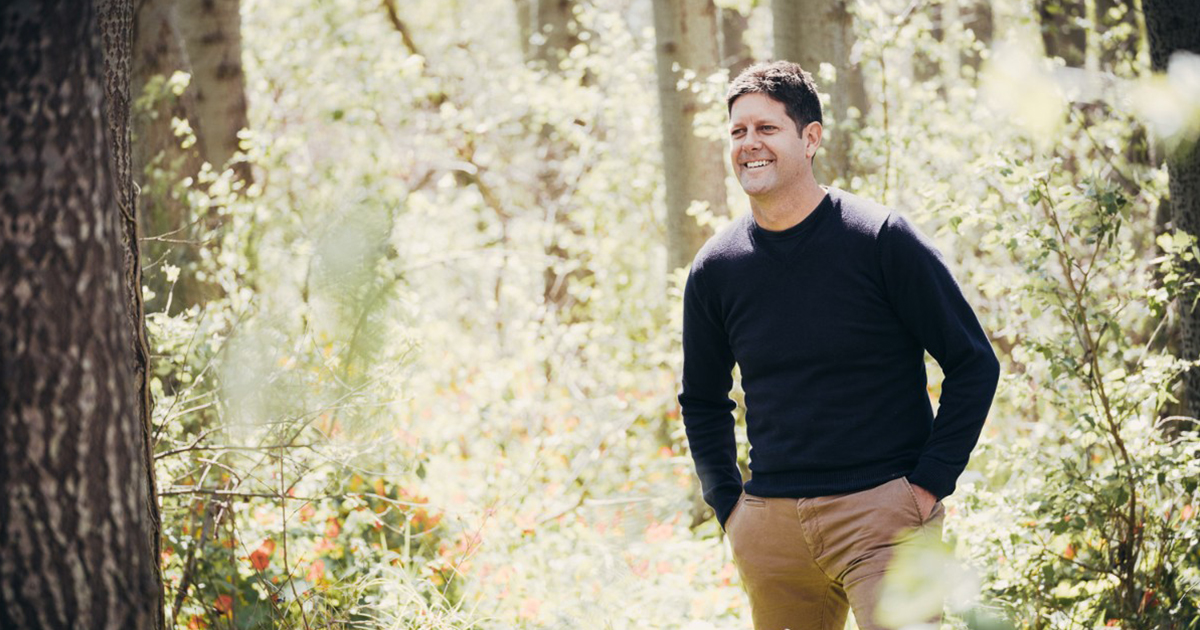 It was December 2016 and the busiest part of high performance hockey coach Paul Revington’s season was over. Feeling relaxed, the 44-year-old sportsman turned in early that night with his wife, Sandy.

“I was woken up at 11:15 pm by his jerking body and the sound he was making,” Sandy remembers. “It is hard to describe – a bit like he was desperately gasping for air.” Assuming her husband of 18 years was having a nightmare, she switched on the light and reached over to wake him. “What I saw was terrifying,” she recalls. “He was lying on his back with his head thrown back. His eyes were huge, but rolled right back into his head. I panicked. I put my head on his chest to listen to his heart, trying to work out what was going on. His heart was racing.”

As suddenly as it had started, Paul’s fit subsided. “His head snapped forward and his eyes were still wide open. He looked straight at me but I could see he was ‘not there’,” Sandy says. “He didn’t have full control of his limbs. He just slid off the bed.”

Bewildered, Sandy called an ambulance and called her parents to babysit the couple’s baby twins so she could accompany her husband to Mediclinic Constantiaberg. “When my parents arrived, about 30 minutes after Paul’s seizure, he started showing the first signs that he recognised us. I was totally shaken. We all knew there was a long journey ahead of us.”

Harrowing as it must have been, that night marked the beginning of the end of the inexplicable health problems that had plagued Paul for almost five years. CT scans followed by an MRI revealed a brain tumour the size of an orange, which needed to be surgically removed. In retrospect, I probably should have been more vocal about the symptoms I’d been suffering,” Paul reveals today. “I’d had severe head pain, momentary blackouts and even occasional stuttering. I thought it was all due to burn-out and work stress. I’m sorry I ignored it now, but I honestly thought it was normal to experience these things.” Paul was a new parent to twins, with a demanding job as head coach of the Malaysia men’s hockey team

“The extent of what I was experiencing was debilitating at times, but I pushed through. It made me less talkative, moody and grumpy – but the doctors I consulted over the years said I was in excellent physical shape and prescribed migraine medication and anti-depressants.”

Sandy adds that doctors had conducted blood tests, put him on a vitamin-boosting drip a few times and advised him to try to take it easy. Subsequent visits to a psychiatrist saw Paul being prescribed Xanax and sleeping medication to help him get through stressful work situations.

Now that the real reason for Paul’s ill health was apparent, it was the start of a harrowing journey for the young family. Dr Zayne Domingo, a neurosurgeon at Mediclinic Contantiaberg, explained to them that the MRI scans had revealed a very large mass and that there was no definitive way of telling whether it was benign or malignant prior to operating. “It was astounding to see the size of the tumour and how Paul’s brain had been squashed to accommodate it,” Sandy recalls.

Paul was understandably extremely concerned about the diagnosis. He was also relieved. His bizarre seizure and symptoms finally had a cause. “Dr Domingo explained there were some good signs, such as the size of the tumour and the thickening of the skull bone above it. This indicated slow growth rate, which is more typical of a benign tumour,” Sandy recalls. “He also explained that the position of the tumour made it accessible.” However, the chances of possible complications during and after brain surgery are usually high.

“It was very scary and Dr Domingo made it clear it was a precarious situation with a variety of possible outcomes. But he explained everything with complete honesty and in a lot of detail. We were very grateful for that.”

By all accounts, following his marathon eight-hour surgery, Paul’s recovery was nothing short of remarkable. “I think this was partly to do with his attitude and his zest for life,” Sandy believes.

Just 24 hours after having part of his skull removed and replaced, Paul was walking circuits around the highcare unit. Other than the pain of re-dislocating the shoulder he’d damaged during his major seizure, his only setback was reduced control of one side of his tongue, which affected his speech. It took several months to return to normal and he occasionally feels the weakness when he’s tired or has been talking a lot.

“The most wonderful thing was realising my headaches were gone for good,” Paul says of his ordeal. “I came out of surgery with 40 staples in my head; it looked like I’d been bitten by a shark. I will always be grateful for the world-class medical expertise and care I experienced from everyone involved.” Dr Domingo adds that fortunately, all Paul’s incisions are behind his hairline, so the scars are no longer visible.

Today, the Revingtons live in Marlow in the United Kingdom, where Paul is assistant coach to the Great Britain Women’s Hockey Team and head coach of the Great Britain Under-23 Women’s Team. Together with their four-year-old twins Max and Pippa, the couple looks forward to a happy future together.

Paul is upbeat about his experience. “I believe I was meant to get this tumour to reconnect with the many wonderful people who have been part of our lives at some stage over the past 25 years during our periods in South Africa, Ireland, Malaysia and our return to SA, before we left for the UK in 2017. “Apart from the emotional support of our extended families, we reestablished contact with friends who showed us unbelievable love during my diagnosis and recovery.”

“When most normal cells get damaged, they die and new cells take their place,” says Dr Domingo. “However, sometimes this process goes haywire and either unnecessary new cells form, or the damaged cells simply don’t die. The build-up of extra cells can cause a problematic mass of tissue.”

Brain tumours can occur at any age, and doctors and researchers do not know the exact cause. Risk factors can include exposure to high-dose X-rays (for example radiation therapy where the machine is aimed at the head) and a family history of brain tumours.

Paul’s tumour turned out to be a left frontoparietal, Grade 1 meningioma and was successfully removed via a craniotomy. “During surgery, an instrument called an ultrasonic aspirator fragments the tumour so that the small pieces can be removed,” Dr Domingo explains. “We work within the tumour to reduce pressure on the normal brain. The pathologist then comes into theatre and a provisional histological diagnosis is made. This guides the surgeon as to how aggressive they must be in trying to remove the tumour. In Paul’s case, we were able to remove the entire tumour.”

YOUR BRAIN WEIGHS ABOUT 1.4 KILOGRAMS AND IS COMPOSED OF NERVE CELLS AND SUPPORTIVE TISSUES KNOW AS GLIAL CELLS AND MENINGES.

2. The cerebellum controls your balance, your moving muscles and other complex functions.

3. Your cerebrum controls your senses, memory, emotions, thinking and personality.

● People with brain tumours have several different treatment options, depending on the type and grade of the tumour, its location in the brain, its size, and your age and general health. Options include surgery, radiation therapy and chemotherapy.

● Surgery is usually the first treatment and a craniotomy is the most common type of operation performed. Your surgeon will cut a piece of bone out of your skull and will use an image-guided system to pinpoint the precise location of the tumour. Once removed, the area of bone will be permanently secured back in place with metal brackets and your scalp will be stitched back in place over the bone.

● If the tumour is close to a part of your brain that controls an important function, such as speech, movement or feeling, your neurosurgeon might recommend an awake craniotomy. During this precedure, you are aneasthetised so that you don’t feel pain, but you are able to respond as your surgeon asks you to perform certain tasks. T

“Primary brain tumours are named according to the type of cells or the part of the brain in which they begin,” Dr Domingo explains. Secondary brain tumours occur when cancer cells travel through the bloodstream to the brain. Cancer of the lung, breast, bowel and kidney are likeliest to spread to the brain.

The most common types of primary adult brain tumours are:

GLIOBLASTOMA These belong to a group of brain tumours known as gliomas. Because their threadlike tendrils can extend to other parts of the brain, they are difficult to remove.

ACOUSTIC NEUROMA The cells that form this benign tumour make up the lining of the eighth cranial nerve as it passes through a canal that connects the inner ear to the brain. Symptoms include one-sided hearing loss, balance problems and tinnitus.

MENINGIOMA This arises in the meninges – the sheets of tissue inside your skull that protect your brain – and is usually benign.

OLIGODENDROGLIOMA This develops from cells that make the fatty substance that protects your nerves. It usually occurs in the cerebrum, in the frontal or temporal lobes.

The meaning of melanin

What is syndrome x?