Home > Babies (up to 1 year) > It begins: a successful emergency C-Section

It begins: a successful emergency C-Section

Long-distance trail runners Landie and Christiaan Greyling first met at an Adventure Race. Now, as the proud parents of little Christopher, they’re embarking on a whole new kind of challenge. 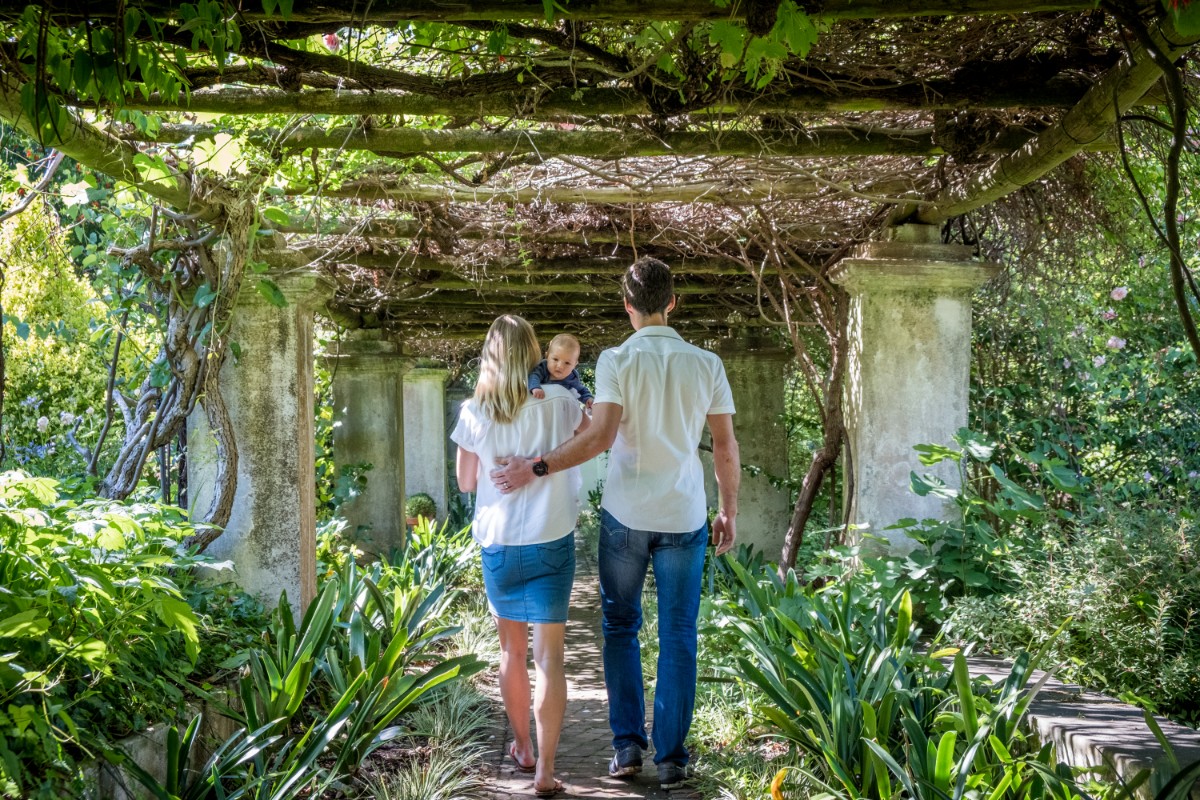 “We all have that competitive side,” says Landie Greyling. “You want to be that person who has the perfect pregnancy, with no problems, the perfect natural delivery, with no pain medication or surgery. But on the day, none of that stuff came into my mind. I’m sitting here now, with this little guy on my lap – that’s all that matters.”

Landie is more competitive than most. She was awarded provincial representative colours in cross-country at the age of nine, and since then has become the pre-eminent female trail runner in the country: a previous winner at UltraTrail Drakensberg – a 100km trial of endurance through the country’s most unforgiving mountains – she finished on the podium in 11 different races in 2017 alone.

“I think it’s part of who I am,” she says. “It’s a natural human mindset to want to push your limits, and progress in some way. We seem to want to challenge ourselves and find the next big thing that excites us.”

In 2008, that next big thing was Christiaan. “We met at an adventure race in Magaliesburg,” she says. “I had no idea what that meant. A few friends asked me to go along, and it was basically a cross-country course that involved some mountain biking, off-road running and a few obstacles. A lot of mud. Christiaan was there with another team, and when I saw him, I immediately thought, Okay, this guy knows what he’s doing.”

Christiaan was equally impressed: he pretended to be part of a running group, and invited Landie to join. “There was no group,” she laughs. “He just persuaded some of his friends to make as if they were running together. After about three runs, it was just him and me, and I realised something was up.”

Ten years later, they have a new adventure to take together. Now just three months old, Christopher Greyling visited 15 countries while he was growing inside his mother’s tummy. By the time he was three weeks old, he’d seen the view from high up on Simonsberg, in Stellenbosch – and at four weeks he watched his dad cross the finish line at The Otter African Trail Run in 10th place. This is a kid with adventure in his blood.

Whereas most people struggle to find time to exercise, Landie’s life fits in around her training. “I usually have two to three sessions a day,” she explains. “One easy run in the morning, for 40 minutes or an hour, followed by a group session in the afternoon, where we will concentrate on hill training or speed workouts on the track. We’ll alternate those with running-specific strength sessions in the gym, core and mobility work, and long runs, which can range from 90 minutes to six or eight hours at a time.”

Her diet is just as carefully structured. “This is something we had to consciously decide: how are we going to get nutritious healthy food into our bodies?” she says. “It sounds crazy, but it doesn’t come naturally. We had to sit down and plan how we were going to make it easy for ourselves. It starts with simple things – only keeping healthy ingredients in the house, for example, and using the time we do have to cook big quantities at a time, ahead of the week. Once you make these small steps part of a habit, it’s easy.”

Working with Christiaan helps. “I think having a partner who’s invested in this journey with you is definitely key to keeping up a healthy routine,” she agrees. “They help keep you motivated – and you don’t have to explain where you’ll be for five hours on a Saturday morning.”

Time management, planning, teamwork: these are all great lessons for any prospective parent. “I don’t think we ever consciously decided to try to have a child. We always said we’d be married for five years before we start thinking about kids,” Landie says. “But we were travelling all over the world for races – and we’d just started a business together as well, which took up a lot of our time. We were happy with our lives at that point.”

At the end of 2017, Landie picked up her first-ever injury. “I couldn’t run for two months,” she says. “Before we knew it, we found out we were pregnant.”

Dr Elzette Henn, Landie’s gynaecologist, who is based at Mediclinic Stellenbosch, says that because Landie is such an active runner, she should continue to train, within moderation, during the first few months of her pregnancy. “We always say, listen to your body,” says Dr Henn.

“Luckily, as a healthy endurance athlete, Landie is very good at that already. Being fit does help, I think, but it’s no guarantee against complications. So I suggested she continue her exercise routine, while we did all the necessary tests and consultations and monitored the baby’s movement, and if she felt at all uncomfortable, or had any bleeding or contractions, she should stop.”

The Greylings’ pre-planned diet was also a benefit. “I suggested she load up on fish and nuts, vegetables and fruits,” says Dr Henn, “although one should be careful not to over do the fruits, because they contain a lot of natural sugars. In the beginning of pregnancy it’s normal to crave carbs because they offer a fast source of energy for a growing baby, and they are easier to tolerate when you are nauseous. But limit your caffeine intake, and skip raw meat. And of course, steer clear of alcohol.”

A natural delivery was also part of the plan for Christopher. This is a big decision for both mom and doctor, says Dr Henn. “If you look at the science, normal deliveries are still better for baby and mother,” she explains. “But I feel we should not take unnecessary risks just for the sake of having normal deliveries. Some doctors feel it’s better to opt for a C-section, to avoid any chance of liability in the case of a negative outcome. That said, as doctors we have a responsibility to make sure that both mother and baby are safe and healthy.”

On the day, Landie’s water broke before she began to experience contractions. “Everything was going well,” says Landie. “The signs were good. But after 15 hours of labour, baby just didn’t want to drop.”

At first the contractions were light enough that Landie was able to sit up in her hospital room and bounce on the big exercise ball. Her friends visited, and didn’t believe that she was in labour. It got more difficult from there.

Landie went through five hours of serious contractions. During this time, Christiaan remembers being more stressed out than mom. “I tried to be calm,” he says. “I did everything she asked me to do. In the end I think we worked well as a team to go through the birthing pains. She took no painkillers and wanted to do it the natural way. I managed to keep my head – until Dr Henn said she thought it best that we do a Caesarean delivery.”

“During labour a doctor needs to take both the mother and her baby into consideration,” Dr Henn says. To do that doctors use a partogram: a chart that represents the progress of labour over time, and directs the doctor’s decisions. This chart factors in all crucial observations, including the condition of the mother, the condition of the foetus and the progress of labour.

“If labour goes on for too long, we must have a reason,” says Dr Henn. “But sometimes we can only determine what that reason is by performing a C-section. The biggest risk is foetal distress – and that can have a negative outcome.”

A C-section took Christiaan by surprise. “It all happened within minutes,” he says. “I had to meet people I have never dealt with before and put my wife and son’s lives in their hands. I was even praying that Landie would give birth while she was on her way into the theatre.”

Landie and Christiaan trusted Dr Henn to make the right decision. “Maybe it’s because I’m an endurance athlete, but I almost felt a natural delivery was an achievement to aim for. But Dr Henn was with me through my pregnancy from the start,” says Landie. “And by the time she made the call to have a C-section, I was ready.”

The reason Christopher didn’t drop became clear during surgery: his umbilical cord had become wound three times around his neck. “If she hadn’t made that call,” says Christiaan, “we would have lost him.”

“Landie was an excellent patient during the whole process,” says Dr Henn. “Her fitness level, positive mindset and the wonderful support from her husband made a big difference.”

Christiaan says his own love for the mountains began at the age of five when his parents blazed a hiking trail on the family farm, in Mpumalanga. “My mom would mark the route, and us kids would carry the supplies. We’d trek anywhere from 14 to 21 km in a day. I can still remember the first time we marked the trail. I got left behind.”

You get the sense Christopher won’t be. Landie can’t wait to take the family camping in the Cederberg. Christiaan is making plans for a boys-only fishing trip to Lesotho. “I always laugh when people ask, ‘So when is he lining up for his first race?’ But I’m not too fussed about what he grows up to be,” says Landie. “What’s important is that we continue to do what comes naturally to us. I’d love for him to love the outdoors, and to share in our appreciation for the natural world.”

Life with baby in tow looks promising. Christiaan finished fourth at Ultra-Trail Cape Town 2018, conquering the dangerously hot conditions to succeed where previous winners chose to drop out. “I ran as if I had nothing to lose,” Christiaan says. “Everything I do now, as a dad, I do with courage. I work harder. I love more. And I sleep less!”

Immunity and your child

Prevention is always better than cure. Vaccines are the best protection you can offer your child against infectious diseases.

Why does my baby’s cough sound like a bark?

Croup is a childhood condition that affects the windpipe (trachea), the airways to the lungs (the bronchi) and the voice box (larynx).

Read more
Published in Babies (up to 1 year)

Why is hand hygiene so important?

The science and significance of sleep