Sickle cell anaemia is an inherited blood disorder, characterised by episodes of pain and chronic anaemia.

What is sickle cell anaemia?

Normal red blood cells are shaped like a biconcave disc and are flexible, moving easily through the blood vessels to deliver oxygen to the tissues. Red blood cells contain the protein haemoglobin, which transports oxygen.

People with sickle cell anaemia have defective haemoglobin, called sickle haemoglobin (HbS). When HbS molecules release oxygen to the tissues, they form rod-like structures in the red blood cells, making them rigid and pointed – somewhat resembling sickles. Their shape often causes the sickle cells to get stuck in small blood vessels, blocking the flow and depriving the tissues of oxygen-rich blood. This can cause periodic episodes of pain, called “crises”.

Additionally, sickle cells die after only 10 to 20 days (normal red blood cells live for about 120 days in the bloodstream), and cannot be replaced quickly enough. The blood is thus continuously short of red blood cells, resulting in chronic anaemia. 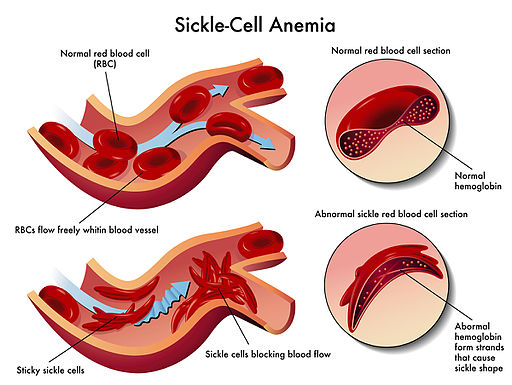 Sickle cell anaemia is caused by a defect in the gene that is the “blueprint” for haemoglobin: the defective gene gives instructions for making sickle haemoglobin.

Children who inherit a copy of the defective gene from each of his/her parents develop sickle cell anaemia. Children who inherit a copy from only one parent do not develop the disease, but have the sickle cell trait, in other words, they will be carriers of the HbS gene. People with the sickle cell trait usually have no symptoms, but can pass the HbS gene on to their children. They have enough normal haemoglobin to keep the red blood cells flexible, but need special care if they go under general anaesthetic, and are advised against activities involving below-normal oxygen levels, such as scuba diving or high altitude mountain-climbing.

If both parents are carriers, with each conception there is a 25% chance the child will have sickle cell anaemia; a 25% chance of not having or carrying the disease; and a 50% chance of being a carrier.

Who gets sickle cell anaemia and who is at risk?

Sickle cell anaemia is particularly common among the American black population, people from tropical Africa, the Middle East, Greece and India, as well as countries where racial admixture has occurred over centuries like in South Africa (although the occurrence here is still relatively low).

Having the sickle-cell trait confers a selective advantage in malaria areas, as sickle cells are resistant to invasion by the malaria parasite. This advantage has resulted in propagation of the HbS gene in populations in malaria areas, particularly central Africa.

Sickle cells can cause blockages in many parts of the body, resulting in various symptoms and complications. Symptoms start at 10 to 12 weeks of age and range from mild to severe in different people. The symptoms and signs may include:

How is sickle cell anaemia diagnosed?

A full blood count will show anaemia and abnormal cells in the peripheral blood smear. The diagnosis is confirmed by a test called a haemoglobin electrophoresis. This test shows the presence of the abnormal haemoglobin.

It is important that children with the disease are diagnosed early so they can be monitored and if necessary treated as early as possible. Haemoglobin electrophoresis can be performed on newborns, at the same time as other routine screening tests. The test is not routine in South Africa since our incidence is not high enough.

It is also possible to test the unborn child for the abnormal haemoglobin gene by sampling the amniotic fluid (amniocentesis) or tissue from the placenta (chorionic villus sampling).

If you are in a high-risk group you should be screened for HbS during pregnancy and before anaesthesia (including anaesthesia for dental procedures). When someone is diagnosed with sickle cell anaemia, their family members should also be tested.

How is sickle cell anaemia treated?

Most complications are treated as they arise. For example, eye surgery may be used to prevent further vision loss from eye complications. Leg ulcers may be treated with cleansing solutions, or with skin grafts in persistent cases. Severe, ongoing pain may require hospitalisation and treatment with painkillers, such as morphine, and intravenous fluids.

The following forms of home treatment can help reduce frequency and severity of crises and prevent complications:

Several experimental modes of treatment are continuously being evaluated such as bone marrow transplantations and therapy with certain anti-cancer drugs.

What is the outcome of sickle cell anaemia?

Many people with sickle cell anaemia are in reasonably good health much of the time and able to lead productive lives. Over time, organs such as the liver, kidneys, lungs, heart and spleen can become damaged, resulting in early death. However, life expectancy for the disease has increased over the last 30 years, with many people now living into their mid-40s or longer.

Can sickle cell anaemia be prevented?

The only way to prevent sickle cell anaemia is by genetic counselling of carriers or persons with the disease, and parents taking the option of not conceiving children or with early prenatal diagnosis. Comprehensive treatment, begun early, can help in preventing some of the complications of the disease.

When to call the doctor

If you or your child has sickle cell anaemia, you should be in regular contact with your doctor and able to ask him or her about any health aspect that concerns you. If any of the following symptoms occur, call your doctor immediately:

The information provided in this article was correct at the time of publishing. At Mediclinic we endeavour to provide our patients and readers with accurate and reliable information, which is why we continually review and update our content. However, due to the dynamic nature of clinical information and medicine, some information may from time to time become outdated prior to revision.