Home > Dermatology > This is me: Leleti Khumalo

This is me: Leleti Khumalo

Going without make-up is a bold move for any actress. But for Leleti Khumalo, who has vitiligo, it is life-affirming. 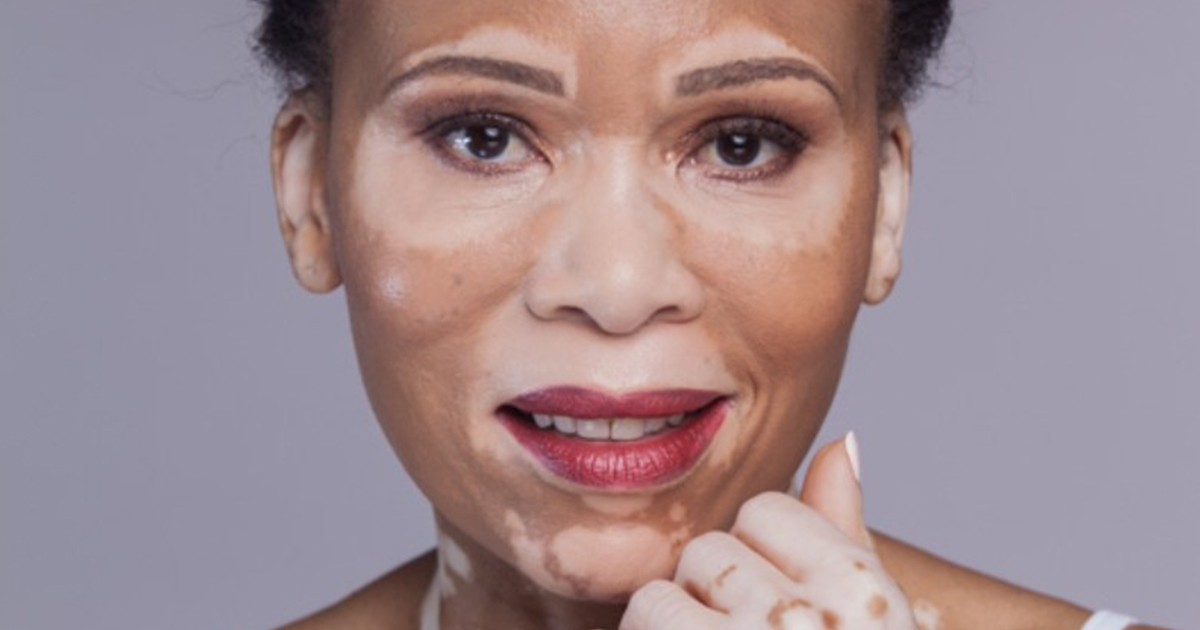 “I realise they react that way because they don’t understand the condition. Instead of getting upset, I try to engage with them. I explain that my blotchy skin isn’t because my ancestors are punishing me. It’s because I have an auto-immune disease. In my industry, appearance is everything. I used to be desperate for a cure. Now I want to show people, this disease doesn’t change who you are.”

The award-winning actress, who catapulted to fame as a teenager in Sarafina!, is no stranger to the public gaze. But since ditching her attempts to disguise her skin condition, Leleti is attracting even more attention for all the right reasons. “So many people with vitiligo are belittled, humiliated and mocked because of their pigmentation,” she says. “I want to send people the message that this disease doesn’t change who you are as a person. Living successfully with vitiligo means embracing and accepting who you are, without any shame.”

As Dr Dilshaad Asmal, a dermatologist at Mediclinic Cape Town explains, vitiligo isn’t contagious or dangerous – but it is incurable. “It occurs when your immune system mistakenly attacks parts of your melanocytes, your skin’s pigment-producing cells,” she says. “This results in patches of white skin that are devoid of melanin.”

Although the exact cause is not known, scientists believe it could be due to genetics. People from families with an increased prevalence of thyroid disease, diabetes and vitiligo appear to be at increased risk for developing the condition.

“I first noticed little spots on my upper leg when I was about 18,” Leleti recalls. “They weren’t painful and they didn’t bother me, so I simply shrugged them off.” As a youngster growing up in the township of KwaMashu in KwaZulu-Natal, she had no access to reliable information about vitiligo – and Leleti didn’t allow the discoloured patches to sidetrack her while she focused on her career.

However, the white areas of skin continued to grow, to the point where the actress was eventually spending up to an hour a day using concealer and make-up brushes in an attempt to hide the discolouration.

“In my industry, your appearance is everything. I was desperate for a cure,” she reveals. “I tried everything – herbs, capsules, creams, homeopathic concoctions. I also underwent light therapy, which was incredibly painful and time-consuming. I did that at least three times a week for almost six years. But nothing really helped.”

In 2012 while battling to fall pregnant with a child from her second husband, businessman Skhuthazo Khanyile, Leleti was finally forced to confront her demons. “I’d had numerous miscarriages, and the doctors I consulted warned me that the hormone changes that come with pregnancy might cause my vitiligo patches to spread even further,” she recalls. “I was in a very dark place, but I knew there was no choice, I wanted to become a mother; I was resolved I wanted children.”

When the couple conceived naturally, and were told to expect triplets, Leleti’s concerns turned to deep joy. But she was still using make-up, scarves and long-sleeved shirts in an attempt to cover up the patches of white skin that were now spreading rapidly.

Sadly, one of the triplets died at birth and while mourning the loss of her baby and caring for the surviving twins, Leleti spiralled into despair. “I was left with too many questions. I shut myself away from the world. I cried, I prayed and I blamed myself. It was a double tragedy because I was dealing with my worsening skin condition at the same time.”

And then, the thespian powerhouse realised she needed to rethink her priorities. “I credit my husband with helping me come to terms with vitiligo,” she explains. “At the height of my grief and sadness, I asked him if he felt differently about me because I looked so different. He said I was still as beautiful to him as I was the first day he saw me.”

Skhuthazo’s unwavering support marked a turning point in Leleti’s approach to her skin disorder. “I made the decision there was no need to hide myself anymore,” she explains. “I had created a false sense of self by masking my true identity – it was time to show the world the real me. I wanted to tell my story and to give the world the message that vitiligo is something to be embraced and accepted.”

In her current role as MaZulu in the e.tv drama Imbewu: The Seed, the dynamic actress faces the cameras without any make-up. “In discussions with the show’s executive producers, I explained that I wanted to play a character with vitiligo and that I no longer wanted to conceal my condition.”

At home, when her young twins ask questions about her blotchy skin, she is happy to explain that “mommy has these spots because she is special”. “My attitude has changed because my focus has changed,” she explains. “My life is no longer about me – it’s about my young family – and others out there who su er with vitiligo.”

Vitiligo is pronounced vit-ih-LIE-go. Approximately 1% of people will develop vitiligo in their lifetime, worldwide. The total area of skin that can be affected by the disease varies. It can also affect the eyes, the inside of the mouth and the hair. In most cases, the affected areas remain discoloured for the rest of the person’s life. It affects people of all skin types, but it may be more noticeable in people with darker skin.

COMMON VITILIGO Starts as one or two pale spots. Over time, more of these patches start to appear.

SEGMENTAL VITILIGO Usually appears in childhood and occurs in only one segment of the skin. Once enlarged to its full size, it stops growing. While it won’t disappear, it won’t start appearing elsewhere on the body.

Vitiligo occurs when pigment-producing cells (melanocytes) die or stop producing melanin — the pigment that gives your skin, hair and eyes colour. The involved patches of skin become lighter or white. Doctors don’t know why the cells fail or die. It may be related to: A disorder in which your immune system attacks and destroys the melanocytes in the skin Family history (heredity) A trigger event, such as sunburn, stress or exposure to industrial chemicals

How is it diagnosed

As Dr Asmal explains, in addition to examining your skin, your doctor may take a small sample (biopsy) of the a ected skin and perform a blood test to rule out any underlying causes such as anaemia or diabetes.

Vitiligo and the Sun

People with vitiligo may be more vulnerable to sunburn because their pale skin patches have lost their natural protection against the sun’s rays. Usually, your skin is protected by melanin. Exposure to the sun increases melanin production and turns the skin darker to protect it from burning. This does not happen in vitiligo patches, where melanin is either absent or inactive. If vitiligo skin is not protected, it is likely to burn quickly. The areas most at risk are those where the skin is thinnest, for example eyelids, nose, neck, the décolletage and the backs of the hands. Not only is sunburn painful, but it might stimulate the vitiligo to spread in some people. Sunburn also increases the risk of skin cancer. You need to choose a sunblock or sunscreen product that protects you from the ultraviolet light in the sun’s rays.

There are two types of rays:

UVA are long wavelength rays which penetrate deep into the skin and can cause dryness and wrinkles, as well as contributing to burning. On sun protection products, the extent of protection against UVA rays is indicated by stars. Vitiligo skin requires at least 4 stars UVA protection

UVB are medium-wavelength rays which are mainly absorbed in the upper layers of the skin. They are the main cause of sunburn. On sun protection products, the extent of protection against UVB rays is indicated by the Skin Protection Factor (SPF) number, which ranges from 2 to 50+. Vitiligo skin requires at least SPF 30. There is little evidence that SPFs of over 30 provide any additional benefit.

Is there any treatment?

Although there is no cure for vitiligo, some drugs, used alone or with light therapy, can help restore some skin tone. Although you might not see a change for months, applying corticosteroid cream to the affected area may help return some of the colour. Dr Asmal adds that ointments containing tacrolimus or pimecrolimus may be mildy effective if you have small areas of depigmentation, especially on your face or neck. Light therapy (when you are exposed to an ultraviolet A (UVA), UVB or excimer light) might show some improvement when combined with taking psolaren (a plant-derived substance) orally or topically

Skin cancer is the most common cancer in South Africa. How does it occur, and who is most at risk? Are there different types? Is it possible to self-test? What

In 2005, Melissa Taylor was told she had melanoma – and that it was so advanced, there was next to no hope of survival. This is the remarkable story of

One Response to “This is me: Leleti Khumalo”