Home > Children (1 to 12 years) > Nosebleeds: Is my child’s nosebleed serious?

Nosebleeds: Is my child’s nosebleed serious? 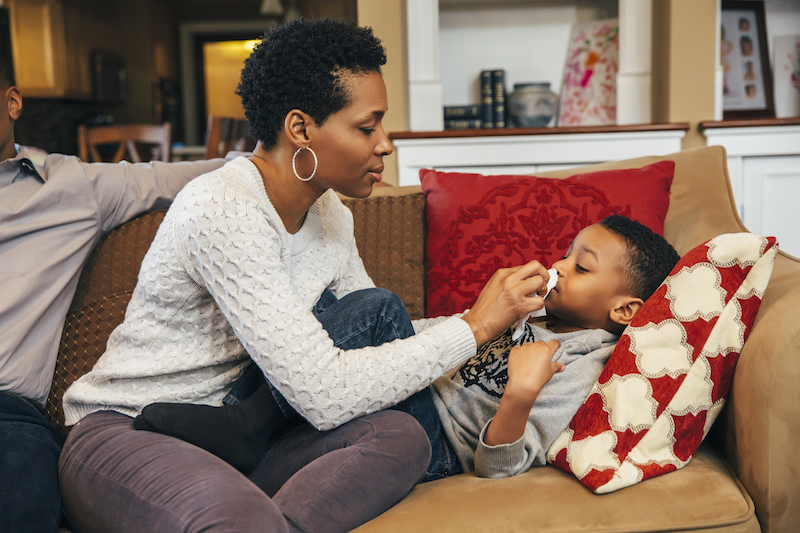 Although a nosebleed can be a scary thing for both you and your child, there’s usually no reason to worry. Mediclinic experts explain further.

‘Epistaxis (nosebleeds) is a very common complaint and presenting symptom and is rarely life threatening,’ explains Dr Carine Smit a paediatrician at Mediclinic Nelspruit. It can, however, cause concern for patients.

‘The front (anterior) part of your child’s nose is especially prone to bleeding because of the extensive number of vessels present there (Kiesselbach plexus or Little’s area on the cartilaginous septum),’ says Dr Raksha Takoordeen, a paediatrician at Mediclinic Pietermartizburg.

Children have more blood vessels in the nasal plexus, which makes nosebleeds more likely for them than for adults, according to Dr Smit.

‘Nosebleeds can be divided into three main categories: local, systemic and idiopathic (unknown). Local causes are the most common (for example scratching or trauma),’ says Dr Smit.

One of the most common underlying causes of nosebleeds in children is exposure to dry air. ‘This dries the nasal mucous membranes causing crusts that may itch and bleed when scratched,’ Dr Takoordeen explains. ‘Allergies and infections that inflame the nasal mucosa can also cause a nosebleed.’

On the other hand, posterior (back) nosebleeds usually occur due to trauma, such as sports injuries or falling. ‘Children sometimes push small toys or foreign bodies into their noses which can also cause a nosebleed,’ Dr Takoordeen adds.

‘These posterior bleeds have a greater risk of complications, such as airway compromise and are more difficult to control,’ explains Dr Smit.

It is very important to remember that most nosebleeds are harmless, self-limiting and occur spontaneously. There are, however, a few things and rare systemic causes for your doctor to consider in recurrent and atypical nosebleeds. Some examples include diseases affecting blood cells, platelets, age-related hardening of the arteries or rare conditions causing abnormal blood vessel formation.

How to stop your child’s nosebleed

Keep your child in a seated position and gently tilt his or her head forward slightly. Tilting backwards can cause blood to be swallowed, leading to vomiting and subsequently aggravating the nosebleed. Pinch the soft part of his or her nose below the nasal bridge. Encourage him or her to remain calm and to breathe through the mouth. Pinch for at least 10 minutes. Do not keep removing your fingers to check if the bleed has stopped as you need to allow the blood to clot. Once bleeding stops, avoid further irritation to the nose.

‘If you would like to consider an over-the-counter medication, simply ask your pharmacist or doctor for a topical vasoconstrictor such as epinephrine, phenylephrine or oxymetazoline (afrin), then apply with a gauze,’ adds Dr Smit.

When to see your doctor

‘If your child has frequent nosebleeds. If he experiences prolonged bleeding from the nose (more than 20 minutes) and if there are other symptoms such as a fever or rash or difficulty breathing, he should be seen by a doctor. It is also important to look for other sites of bleeding, such as bleeding gums and easy bruising,’ Dr Takoordeen adds.

Other reasons to see your doctor urgently include:

Your doctor will consider treatment options such as cauterisation with silver nitrate or packing gauze within the nose. Other medical options include antibiotic treatment or arterial ligation (tying a piece of thread around a blood vessel to shut it off). But it depends on the cause of the nosebleeds. For head trauma, further ENT (ears, nose and throat) surgery may be necessary and is case-specific.

Dr Smit adds that for nosebleeds caused by dry air, patients may benefit from humidification using a cool mist vaporiser in the room or using a saline spray regularly. It is worth discussing further preventative measures with your doctor. For example, keeping your child’s nails well trimmed to avoid unnecessary damage when they scratch their noses.

Ensure safety in the home this summer {infographic}

The majority of childhood accidents occur in a familiar place. As these ER24 paramedics explain, kids are particularly at risk of burn injuries caused by household fires.

Safety in the water {infographic}

Drowning is the second-leading cause of accidental death in South Africa. We look at why, highlight some dangers that come with holidays spent at the beach or in the pool,

Should your children exercise when sick?