The facts about malaria

Malaria occurs in nearly 100 countries worldwide, particularly in sub-Saharan Africa and South Asia. However, if you’re travelling to a malaria-prone area, there are a number of precautions you can take. Dr Marcus Brauer & Associates is an occupational medicine, travel clinic and general practice, linked to Mediclinic and based at the V&A Waterfront in Cape Town.

Where are the malaria areas in southern Africa? 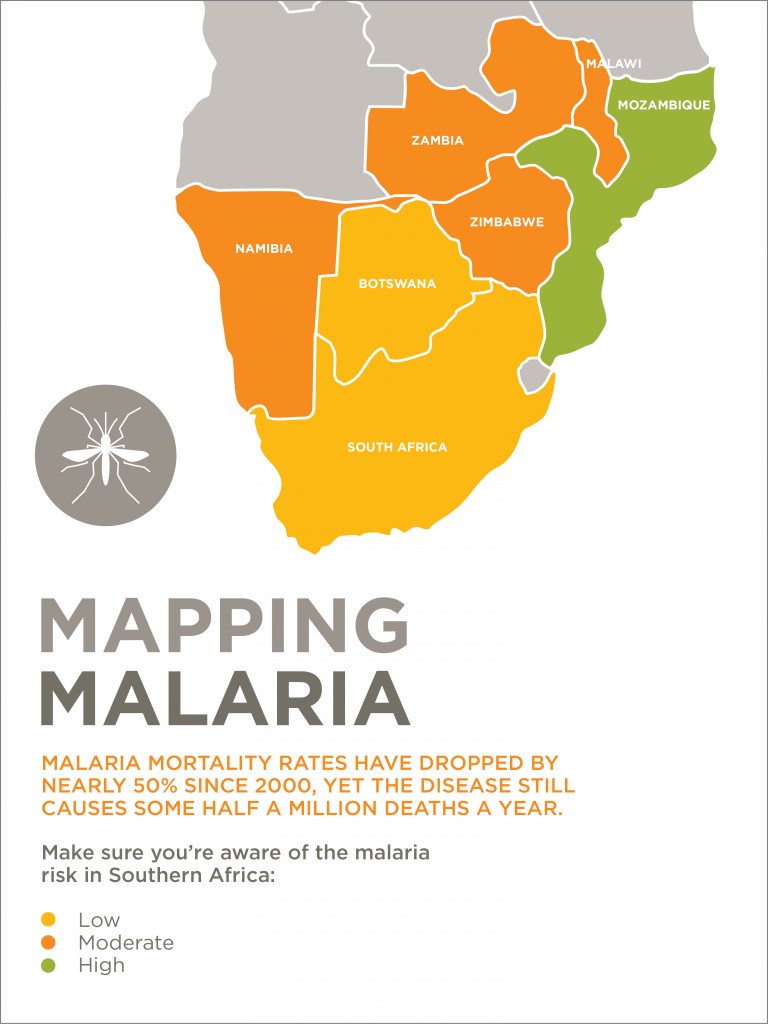 According to Travel Start, these are the areas where you may need to take precautions:
Botswana: the risk of malaria is low but you need to be careful if you travel to the districts of Central, Chobe, Ghanzi, Northeast and Northwest. The cities of Francistown and Gaborone are safe.
Malawi: all areas pose a moderate threat.
Mozambique: all areas pose a threat and risk is considered high.
Namibia: malaria areas include the provinces of Kunene, Ohangwena, Okavango, Omusati, Oshana, Oshikoto, Otjozondjupa and the Caprivi Strip. Risk is considered moderate.
South Africa: Although South Africa has a low threat of malaria, take care in KwaZulu-Natal, Limpopo (including the Kruger National Park) and Mpumalanga.
Zambia: All areas pose a moderate risk.
Zimbabwe: All areas pose a moderate risk.

What causes malaria?
Malaria is transmitted by the female anopheles mosquito, which feeds between sunset and sunrise.

What precautions can I take when in a malaria-prone area?
There are two main precautions against malaria: firstly, preventing the stings; and secondly, using malaria prophylaxis (preventative tablets) when the risk justifies this measure.

Sting prevention measures include wearing light, long-sleeved clothing after sunset, covering exposed skin with DEET-containing mosquito repellants such as Peaceful Sleep or Tabard, and ensuring that your sleeping accommodation has screening to prevent mosquito stings at night while asleep and most vulnerable. For maximum protection you should sleep under treated mosquito netting and have screens on doors and windows. You can also use a fan to move the air, as this further reduces mosquito sting activity.

Do children also need to take malaria prophylaxis?
Yes, if the risk of malaria exposure during the trip warrants it.

Who’s most at risk of contracting malaria?
Children and pregnant women, long-term travellers to malaria areas, and people on camping or overland trips who spend lot of time outdoors.

What happens when you contract malaria?
The female anopheles mosquito carries malaria, and symptoms will usually appear about seven days or more after you’ve been bitten. The first symptoms are usually very similar to flu – aches and pains, fever, headache and so on. After a few days, the typical paroxysms may occur – chills, followed firstly by a high fever for a few hours, and then by profuse sweating. Between these paroxysms, the patient may feel well, depending on the type of malaria that has been contracted. Some forms of malaria are more severe than others, and the time between the paroxysms differs, depending on the type of malaria. Malaria should be suspected in anybody with these sorts of symptoms who has been to a malaria area. If it’s not treated within 24 hours, it can progress to a severe illness that can result in death.

When should I see the doctor if I suspect I have malaria?
This is a vitally important point. The incubation period for malaria is between seven and 10 days after an infected sting. The incubation period can even be longer – sometimes up to three months after a trip. The most common symptoms are a significant headache, muscle ache and fever, which may come and go in cyclical waves. If left untreated, malaria rapidly causes serious illness, so if one is feeling unwell any time from seven days after having been in a malaria area, it’s vital that you seek medical advice. Always ensure you inform your doctor that you’ve recently travelled to a malaria area, and that you wish to exclude this possibility. If diagnosed early and treated appropriately, malaria generally responds well to treatment. Remember this: if you become ill after travelling to a malaria area, consider it to be malaria until proven otherwise.

The information provided in this article was correct at the time of publishing. At Mediclinic we endeavour to provide our patients and readers with accurate and reliable information, which is why we continually review and update our content. However, due to the dynamic nature of clinical information and medicine, some information may from time to time become outdated prior to revision.

Expand your mind during lockdown

Isolation in lockdown needn’t mean brain-freeze. Use this downtime to learn a new skill – or to visit a destination remotely.

Lockdown measures are crucial to minimise the spread of COVID-19. To minimise the impact on you – and your family’s – well-being while cooped up at home, consider these novel ways for staying fit during lockdown.

Protect your mental health during the COVID-19 lockdown

In the weeks of social distancing and self-isolation during the COVID-19 lockdown, pay attention to your mental health.

‘You’re stronger than this. Fix this thing.’