Fight back: Living with colon cancer

Xolani Gwala’s colon cancer diagnosis left him facing some serious questions: Why now? Why me? And can I beat this? 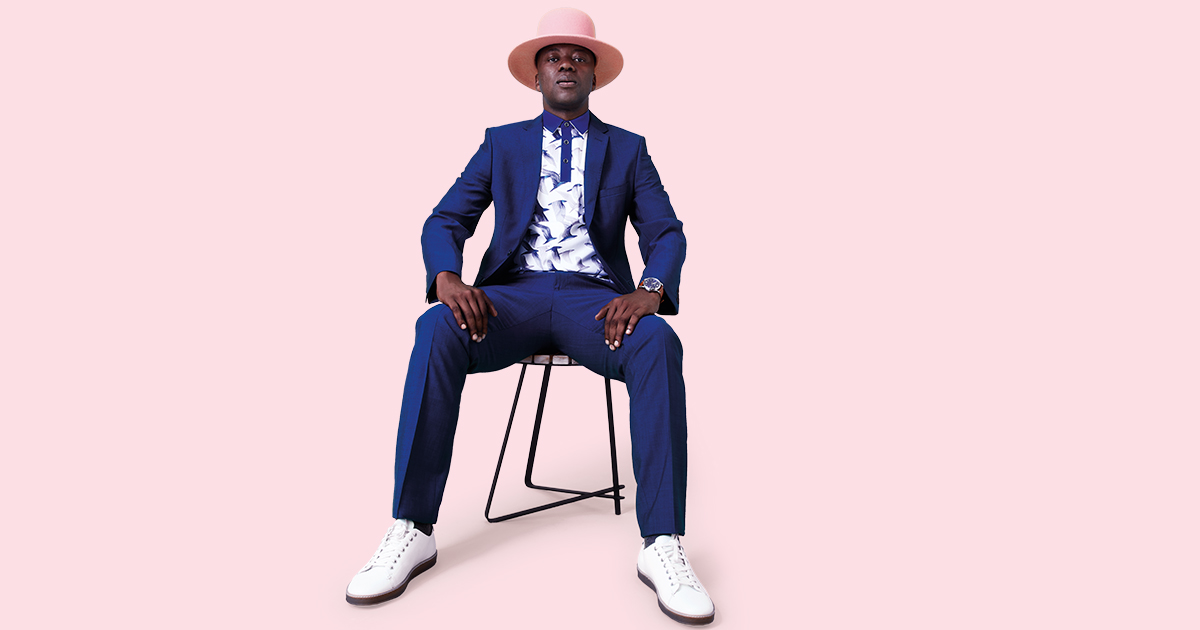 It was a beautiful spring day. Perfect Johannesburg weather. I was standing there in the sun, and I felt so cold.” Xolani Gwala’s first hint that he may be getting sick was when he developed what he thought was a mild fever. These things come and go, he says. This time was different. “I kept waiting for it to blow over. But it persisted, so I went to my doctor. He said it was most likely a viral infection. It still didn’t pass, so I went to him again, and he said the same thing.”

Antibiotics had no effect. His temperature soared. And when his symptoms hadn’t cleared a full month later, his wife, Peggy Sue Khumalo, decided to take the Radio 702 talk show host to hospital for a more comprehensive range of tests. Xolani is a healthy, 43-year-old man who had recently returned home from running the London Marathon. So the results of those tests left him stunned: he had stage 4 colon cancer.

Research by the National Cancer Registry shows that colorectal cancer is the second most common form of the disease among South African men, with an estimated one in 79 males developing the condition. Also referred to as colorectal cancer, this disease develops when benign clumps of cells, called adenomatous polyps, begin to form in the large intestine, the final part of the digestive tract.

Xolani’s oncologist, Dr Omondi Ogude, who practises at Mediclinic Morningside and is a member of the specialist Sandton Oncology Centre, says these polyps develop due to either a genetic predisposition or poor dietary patterns. “This mass originates inside the colon, and grows outward,” he says. “Once it begins to invade the outer layers of the colon, it develops into what we call an invasive malignancy.”

Because these polyps are visible in a colonoscopy, doctors recommend regular screenings to pick them up before they turn malignant – especially because, in the early stages, colon cancer can produce few immediately identifiable symptoms. You may feel as if your bowels are constantly full, or experience alternating bowel issues, including both constipation and diarrhoea, says Dr Ogude.

At stage 0, the cancerous polyp is referred to as carcinoma in situ: it is embedded in the wall, or mucosa, of the colon. As it invades through the colon lining, it develops into stages 1 and 2, and once it spreads beyond the colon walls to affect the lymph system, it is known as stage 3 colon cancer. As these polyps grow to put pressure on the tissue around them, warning signs can escalate: some patients develop piles, hemorrhoids or blood in the stool.

Left unchecked, the cancer will spread to other organs, and this is the runaway fire referred to as advanced stage 4 colon cancer. Each stage has a range of treatment options. Tellingly, there is no stage 5.

Hearing his cancer had grown to such an advanced state was a punch to the gut, says Xolani. “It feels traumatic even now, to talk about it. The doctors told me, you’re too young for this. I quit smoking and drinking about 15 years ago. I have no family history of cancer. They weren’t even looking for it. So I was terrified. You think to yourself, is this it? Am I going to die?”

Xolani’s cancer was picked up only once it had already spread to his liver. Yet he had no symptoms that pointed to a pressing problem. This is unfortunately fairly common, says Dr Ogude.

“This is why we stress the importance of early and regular screenings. Many patients are completely asymptomatic. To give ourselves the best chance of treating the cancer effectively – and ideally, curing it completely – we need to identify the issue in an early stage, when it is still localised in the colon.”

Whereas early-stage colon cancer can be treated and even cured with surgery, stage 4 colon cancer comes with a poor prognosis, he admits. “Invariably, many patients will not survive cancer that is so advanced. This is unfortunately the reality. But that doesn’t mean we have no options,” he says.

Any colon cancer that is amenable to surgery should be cut out as a first option, says Dr Ogude. “We will take a close look, of course. If surgery is not feasible – such as if it is too large, or too close to vital structures – then we will implement courses of chemotherapy or chemoradiation in order to reduce the size of the cancerous mass.”

THE DOCTORS TOLD ME, YOU’RE TOO YOUNG FOR THIS. I QUIT SMOKING AND DRINKING 15 YEARS AGO. I HAVE NO FAMILY HISTORY OF CANCER. YOU THINK TO YOURSELF, IS THIS IT? AM I GOING TO DIE?

Xolani says his treatment involved immediate surgery, followed by aggressive rounds of chemotherapy. “The surgery to cut the cancer out of my colon was an emergency measure,” he explains. “But in my liver, this wasn’t an option. The cancer was just too widespread. It was inoperable. At one point, the doctors told me there was more cancer than liver. So they said, we have to attack this with as much chemotherapy as you can stand.”

In most cases of advanced colon cancer, surgery alone is not enough to eliminate the threat, even if the mass has been successfully reduced. “We can cut out what is visible to the naked eye, but cancer is insidious,” says Dr Ogude. “It can spread to other parts of the body in invisible and unexpected ways.” This is known as micrometastatic disease, when a small collection of cells breaks o from the original mass and spreads through the lymphovascular system or bloodstream.

“Chemotherapy, especially used in conjunction with radiation therapy, is useful in that it can chase these rogue cells and, hopefully, kill them before they attack other organs,” says Dr Ogude. Useful and brutal: Xolani describes his chemo treatments as “crazy”. “It messed up my insides. I was vomiting, constipated, at the same time. The nausea never went away. I spent day after day on the couch. I was sore all over, all the time. It felt like I was going mad.”

This process, from diagnosis through treatment to recovery, can take anything from a few weeks to months at a time, depending on the stage and extent of the cancer. While earlier-stage colon cancer can be cured with surgery without further treatment, more advanced cases can require multiple surgeries and numerous rounds of chemo- and radiation therapy. In total, Xolani has had four surgeries, and his chemotherapy treatments continued for a full year.

Cancer treatment is traumatic for any patient. But it was perhaps even more traumatic for Xolani’s family. He faced the challenge of explaining the disease, and his chances of recovery, to his four daughters. “The smaller ones, who are three and nine, could see their dad is ill. But I think it was harder for the older ones, who are teenagers. They know things. They have Google. They might not know how cancer works, but they understand what it means – the implications. So you can’t sugarcoat it for them.”

The experience can have a binding effect. “I must say that cancer brought us closer together. My wife has been an incredible support. My mother-in-law moved in with us, to help. Friends have rallied around us. And our doctors have brought us all into each step of the process.” Honesty helps. “Every step of the way, we were told exactly what to expect, how hard it would be, the risks involved and our chances of success. We were never under any illusions.”

Currently, Xolani remains on what he calls rounds of “maintenance” chemotherapy – lighter doses, with fewer and more manageable side effects, that act as a safety net to help prevent or delay the return of the cancer.

Today, Xolani’s doctors are optimistic that his cancer is under control. “Xolani has responded very well to treatment,” agrees Dr Ogude. “His attitude has been amazing. We were aggressive with his chemotherapy. In fact we were probably as harsh as we could have been – it was a necessity. But we knew we could use a heavy-handed approach because he had such a strong and positive outlook. He could see the bigger picture. And he had a goal.”

Strength of mind, in these cases, brings benefi ts in the body, he explains. “We are chemical beings. Our internal make-up is guided in many ways by our mindset. If you are positive about the treatment and optimistic about your chances, you are more likely to be motivated to follow the steps and guidelines, and in that way you give yourself a far better chance of recovering.”

However, there is no guarantee that Xolani’s cancer is gone for good. Dr Ogude says the vast majority of stage 4 colon cancer cases will suffer a recurrence of the disease, even after successful surgery and aggressive rounds of chemotherapy. “Remission is a matter of time,” Xolani agrees. “We will have to wait before I can declare I am free of cancer. Nothing in life is guaranteed. I know that. Now, we take this one day at a time.”

Dr Ogude says the first and most important step to reduce your risk of developing colon cancer is to know your family history. “You can’t pick your parents,” he says. “But they inevitably pass their genes on to you. You can live a healthy lifestyle, but if your parents didn’t, it might not matter.”

This means that if you have a first-degree relative, such as a parent, who you know developed colon cancer, you will have a much higher-than-average chance of developing the disease. “You should schedule regular screenings with your doctor at least 10 years before you reach the age at which that relative was diagnosed,” he advises.

General lifestyle habits also play a role: smoking, and regularly drinking anything over moderate amounts of alcohol are both known risk factors. Low-dose aspirin has been shown to help prevent colon cancer.

“Diet is a big one,” warns Dr Ogude. “Saturated fats are especially dangerous. Choosing foods high in fibre and prioritising green vegetables will go a long way to helping you avoid colon cancer.”

Lastly, exercise. Xolani was fit and strong before he was diagnosed, which has helped him withstand the rigours of chemotherapy and recover from surgery. “The fitter you are, the less likely you are to develop cancer, and for those who have cancer, we find the healthier patients recover quicker and more efficiently.”

Good dog: Meet Honey - the diabetes dog trained to save her master's life