The odd couple at the Absa Cape Epic 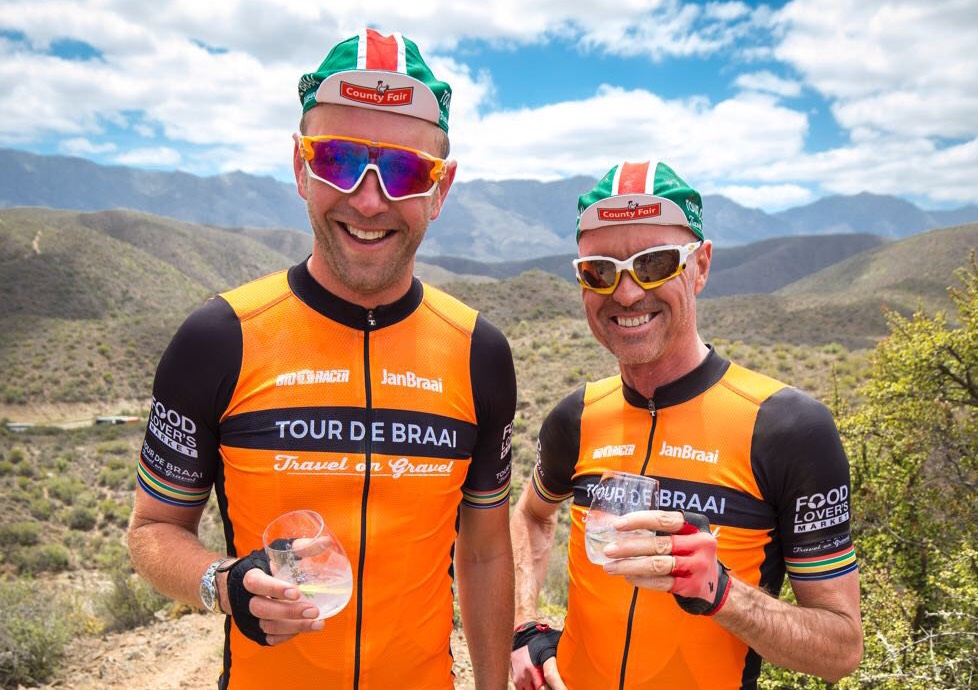 The 2018 Absa Cape Epic will feature some of the world’s top adventure MTB racers. But one team stands out for the good they’re aiming to achieve: flying the flag for cycling as a way to uplift disadvantaged South Africans.

At first glance, one of the teams riding in Qhubeka colours in this year’s Absa Cape Epic seems like an unlikely couple.

One member is Douglas Ryder, who captained the South African national cycling team for nearly a decade, won the Cape Town Cycle Tour in 2001, and represented South Africa at the 1996 Summer Olympics.

The other is Jan Braai, who literally braais for a living. Jan won the hearts of a nation when he single-handedly rebranded Heritage Day as Braai Day. Suddenly a public holiday that was primarily known for politicians droning in half-filled stadiums was quite literally lit up by South Africans celebrating one of the most cross-cultural South African activities of all: the shisa nyama.

So how did this unlikely couple end up in a mountain biking team together?

A change of heart

It all began at a corporate event where Jan and Douglas found themselves sitting at the same table as a marketing executive for Dimension Data. DiData, as they are known, are technology sponsors of Cape Epic, and are also involved in the Tour de France, where they sponsor South Africa’s Qhubeka Cycling Team. (Mediclinic, incidentally, are responsible for the health and safety of the riders in the Absa Cape Epic.)

‘Wouldn’t it be fun,’ said the DiData marketing exec, ‘if the two of you rode the 2018 Absa Cape Epic as a team in Qhubeka colours?’

‘No,’ said Jan, “that does not sound like very much fun to me at all.’

And who could blame him? Jan did not relish the prospect of having to keep up with a man whose very name is synonymous with competitive cycling.

‘Professional cyclists have incredible bike skills,’ Jan explains. ‘And the part that worries me most about the Epic is not so much the ride itself – you can always just stop or walk – but the technical bits. The obstacles. Those parts of the race where you fall and end up in hospital.’

Jan’s fears are not unfounded. The Cape Epic is tough. Last year, Joel Stransky needed extensive surgery to his face after crashing in just the prologue stage of the race at Meerendal Wine Estate.

The following morning the cyclists set off on a ride that was part of the corporate event that Jan and Douglas were attending. It wasn’t particularly gruelling but one section required the riders to cross a fence on a narrow wooden bridge. Douglas was riding just ahead of Jan and to the braai master’s astonishment, as Douglas approached the obstacle he stopped his bike, got off, and was one of the few cyclists to carry his bike over the fence.

‘I’m carrying my bike over this obstacle, Jan.’

‘No look,’ said Douglas, ‘I’m used to cycling on roads, but I think it’s safer to carry my bike over these types of obstacles.’

Jan looked at him for a moment.

‘You know, Doug,’ said Jan, ‘I think we might be able to ride the Cape Epic together next year after all.’

And that’s how the unlikely pair – the cycling guru and the braai master – ended up as a team.

By racing in DiData colours, the team will be flying the flag of Qhubeka – a charity that aims to distribute bicycles to underprivileged communities in order to afford them a healthy method of transport. Giving a bike to a child allows them to get to school earlier, giving them more time in front of their books and their teachers. Giving a bike to an adult allows them to avoid expensive and often unreliable public transport. “Bicycles,” says their website, “are tools of change.”

To date, the charity has donated more than 75 000 bicycles, but they are not just distributed randomly to a waiting list. People earn the bicycles by participating in one of five programmes that rewards participants for regular school attendance, recycling efforts, sports performance and volunteering initiatives.

Jan’s dream is to introduce better and safer cycle lanes that will allow for bicycle commuting and transport in SA’s major city centres. ‘Imagine if we had a proper cycling lane alongside the N2, similar to the cycling infrastructure they have in Amsterdam. Imagine what it could do to the traffic, and to the economy, if we could help thousands of people cycle to work each day.’

Close to the heart

The braai master may be playing the self-deprecating card when it comes to his fitness, but the fact of the matter is that he is an experienced and serious cyclist. At school, Jan represented South Africa in triathlon, where cycling was his strongest discipline, and he has been cycling seriously for about 30 years.

In fact, one of Jan’s spin-off initiatives is the Tour de Braai – a multi-stage cycling tour from the Garden Route to the Overberg that he dubs “the opposite of the Epic”, where an easy ride each day is punctuated with braais, and where he would like to see locals in the region complete some of the stages on Qhubeka bicycles.

‘Braaiing is my job,’ he says, ‘but cycling is my hobby. For me it’s a relaxation activity, like yoga or meditation. But your heart rate increases, the lungs get a workout, and you burn some fat. I genuinely enjoy it. It’s also a great hobby because you need so many little bits of equipment. There’s always something shiny and new that you like or need.’

So which gadget does he have his eyes on?

‘Douglas has nice water bottle cage,’ says Jan with a glint in his eye. ‘If I can persuade him to have another two installed on his bike, he can carry my water for me – and that should close our power-to-weight ratio gap quite nicely…’

It’s going to be an interesting team to watch next week.

A year’s worth of sporting events where Mediclinic plays a key role in providing medical assistance and expertise. Plus: what to look out for at each one – risk factors

For the past three years Mediclinic’s dedicated special events medical team have worked with race organisers across multiple sporting codes to promote and endorse pre-event screening of athletes. Participant pre-screening

What to look out for during the Queen stage

Crowned the ‘Queen Stage’ for its 2850 m of climbing over 100 kms, it is going to be an exciting day of racing. Something different on this stage is the

A true hero: The fight against cystic fibrosis